Sextus Propertius (ca 55 BC -- after 16 BC), foremost of ancient Latin elegiasts, was born into a wealthy family in Assisi in Umbria. His father died while he was still a small child, but his mother oversaw his education, which was good even by the standards of wealthy Romans. Part of the family's property was seized in 40 BC and used to pay the soldiers of Octavian, the future emperor Augustus. This reduced their income considerably, although it appears that Propertius never was bothered by having to make a living. 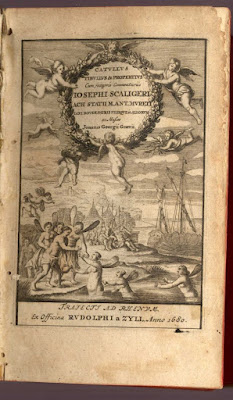 In 34 BC the family moved to the city of Rome, and Propertius took on the dress and habits of adulthood. He showed no interest in the law law, politics or army life. He befriended poets such as Ovid as Bassus.

In 29 BC Propertius published his first book of elegies, known as Cynthia after the woman who was their main subject. It was immediately popular, and remained the most sought-after of his works, and are still the most popular today, despite the fact that his later three books of elegies, less single-minded in the love-struck pursuit of romance, are often regarded as his best work. Propertius published a total of four books of elegies during his lifetime. They were sold together, or the first book, Cynthia, could be bought by itself; therefore, it was sometimes referred to as Monobiblos. Propertius himself seems to have been a little embarrassed to be so often associated only with Monobiblios, and he protested that he could do more than just sigh and moan over a woman. His later works often treat mythological subjects including but not limited to the founding of Rome, which the ancient Romans did not refer to as mythological whether they knew better or not.

The popularity of Propertius' first effort brought him to the attention of the wealthy literary patron Maecenas, which in turn led to his friendship with Vergil and Horace, and to the favour of the Imperial family, and this led to some poems which extravagantly praise Augustus.

The earliest surviving written copies of Propertius' poems are graffiti on the walls of Pompeii, which seem to confirm the impression that he was very popular indeed in his own time. Then in the 2nd century, Apuleius mentions him, and opines that Cynthia's real name was Hostia. But overall, not many mentions of Propertius have been found between his own time and the mid 12th century, when he is his praised and quoted by John of Salisbury. The oldest surviving complete manuscript of his poems, referred to as N because it had spent some time in Naples, was made shortly before AD 1200. The second is known as A and was made around AD 1250. A number of 14th- and 15th-century manuscripts survive, most or all of which seem to derive ultimately from either N or A. After a thousand years in which there apparently was very little interest in his work, Propertius has been one of the most highly-regarded Latin poets from the Renaissance down to our own day. Just another reminder that literary tastes sometimes change considerably.