The Stele of the Lapis Niger

The Romans and the Greeks began using the alphabet at about the same time, in the seventh or eighth century, the Greeks first and the Roman shortly thereafter. But while the Greeks very soon began writing poetry and philosophy and drama, the Romans had very little, if anything, which could be called literature, until the mid-third century AD, when they began to copy some of the Greek literary genres. But they had been using writing for other things besides literature, as we can see from inscriptions: writing upon hard surfaces such as stone or metal. Moreover, in the case of Latin literature, we don't have any manuscripts (writing upon soft surfaces such as papyrus, parchment or paper) until the early 1st century AD. Livius Andronicus and Plautus wrote Latin literature in the 3rd and 2nd centuries BC, but our oldest copies of their work are on manuscripts made much later. We don't know how much the writers of the manuscripts changed what the authors wrote. The scribe who copied a manuscript of a text centuries after its author had died may have thought he was "correcting" the text when he made it more closely resemble the Latin of his own time, whereas, from the point of view of a 21st-century scholar interested in the language of the original author, the scribe was destroying something precious by not simply copying the text exactly. It all depends upon your point of view. The oldest Latin inscriptions, on the other hand, were made as early as the 7th century BC, and they preserve exactly what the language was like in the time when they were created, and therefore, they show us how the language changed.

One of the very oldest Latin inscriptions is on the stele of the Lapis Niger. A stele is a piece of stone taller than it is wide which serves as a monument. "Lapis niger" is Latin for "black stone." In 1899, the archaeologist Giacomo Boni discovered this stele under a pavement of black marble in the Roman forum. 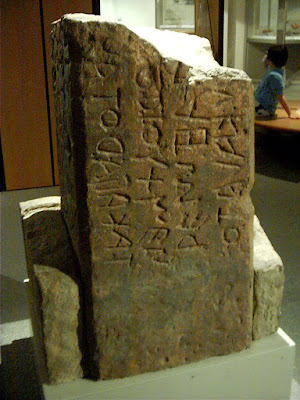 Sometimes people mistakenly refer to the stele itself as the Lapis Niger, but it is light brown, not black. The name Lapis Niger refers to the black marble which was used to cover the shrine containing the stele, some time after it was made.

And when was it made? Estimates have varied widely, from not long before 450 BC to not long after 600 BC. But any of those estimates would make the stele one of the oldest-known objects with Latin writing on them.

And what is written on this stele? What sort of a place, exactly, is this shrine? Again, the experts disagree. Some say it is the place thought by some ancient Romans to have been the tomb of Romulus. (Other ancient Romans believed that Romulus never had a tomb because he flew up to Heaven at the end of his life.) Dionysius of Halicarnassus, Plutarch, and Festus all mention the shrine, and they themselves seem uncertain about what exactly it is. Although the Latin of the inscription is very different from the classical Latin of Cicero, Caesar and Vergil, and is written vertically, and boustrophedon -- that is, the letters in each line go in the opposite direction of the preceding line -- and the individual letters resemble Greeks letters much more closely than later Latin letters do, the main difficulty is, first, that only pieces of the stele, and therefore only fragments of each line, are preserved; and second, that the letters are in such bad shape that experts' transcriptions of what is left vary quite a bit. One line, for example, may refer to a king, or to a priest; another may refer to justice, or to Jupiter. We can generally say that the inscription is a warning that the place is sacred, and describes how those who disrespect it will be punished, although not enough text remains to know for sure just what this punishment would be.

Posted by Steven Bollinger at 8:01 PM