In Classical Studies, in Western Europe, there has been a 9th-century Renaissance, the Carolingian Renaissance supported with the enormous power and purse of Charlemagne;

a 12th-century Renaissance featuring John of Salisbury, William of Malmesbury, and great bursts of Classicism in cathedral schools in Chartres and Orleans and elsewhere, and a sudden great rise in interest in Ovid, Virgil, Terence, Horace, Seneca, and Cicero;

the Italian Renaissance we've all heard about, which occurred mostly in Italy, from the 13th through the 15th century, with Dante, Petrarch, Bocacccio, Salutati, Bruni, Biondo, 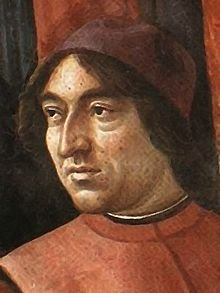 Poliziano, Ficino, Valla, Pico della Mirandola and so many others;

the 19th century Renaissance featuring British and German universities, and the beginnings of the Classical series from publisher such as Oxford and Teubner;

and perhaps eventually people will look back to our time, to things such as the Living Latin movement, and speak of a 21st-century Renaissance.

The number of Renaissance seems to keep increasing. And I'm sure I've left some out -- should I have mentioned an Insular Renaissance in Ireland and England in the 7th century, or earlier? Wow, I haven't even mentioned the 16th century yet, and Erasmus! They're beginning to crowd together so tightly that there's barely any time left between them. Which would mean that...

Perhaps something which has been reborn so many times hasn't ever actually died. Perhaps Classical Latin and interest in ancient Rome have been pronounced dead many times over the centuries, and this isn't remembered so often today because of the natural tendency to select the best literature and most sensible statements from every era, and forget the everyday pronouncements, however persistent the latter may have been. And so we look back upon the best Classical scholars in every era, and tend to forget about those who insisted that there were no such.

How many more Renaissances will there be?

Posted by Steven Bollinger at 4:59 PM