Several years ago, I read a volume from the I Tatti Renaissance Library entitled Ciceronian Controversies (2007, ed Joann Dellaneva), and thought to myself, How odd! that 420 to 530 years ago in Italy, eminent authors of all genres believed that the only way to write Latin correctly was to imitate Cicero! I blogged about this absurd tendency, to treat a single author as if he, and he alone, were worthy of imitation among all of the authors of an entire language which is thousands of years old, and I moved on.

Imagine (if you CAN) how I feel now, having finally noticed (yes, clearly, I am not the sharpest pencil in the drawer, not the quickest to notice things) that Ciceronianism is alive and well today. Latinists, TODAY, may be arguing a point of Latin writing style or usage, and one of them can point out, "Cicero wrote it this way," and, very often, that will end the debate! 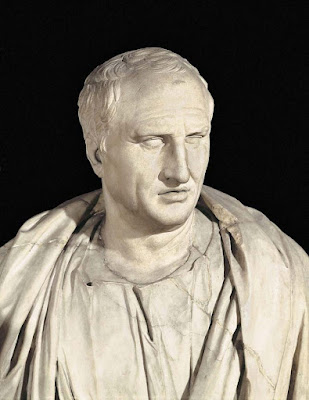 People still study Shakespeare in English classes, and I have nothing at all against that. But does anyone, anywhere, teach English as if Shakespeare were the ONLY English-language author worthy of imitation? If someone does, would it even be necessary for me to enumerate the drawbacks of such an approach?

Well, such an approach is taken -- TODAY. AMONG US -- in the study and teaching of the Latin language. How often? I do not know. Oftener than not? I do not know.

I know only that, now that I have finally noticed that Ciceronianism outlived the Renaissance, I can not ignore it. I can not prevent myself wondering about such things as: is it actually unusual, for someone who has devoted their professional life to the study of Latin, that they might read no Latin at all other than Latin written by Cicero for an entire day? A week? A month? A LIFETIME?

Is it unusual for a Latinist to judge a piece of Latin writing, whether written in the 21st, the 16th or the 1st century AD, by the single criterion of how much it resembles what Cicero wrote?

Is it unusual for a Latinist to assume that everything Cicero wrote was above reproach from a linguistic-stylistic point of view?

And how exactly would those percentages change if, the preceeding three paragraphs, "Cicero" were changed to "Cicero and Vergil"?

Whatever the points of view of Latinists on these and other matters, I don't imagine that I will change their minds. I do drastically over-estimate my abilities much of the time, but I don't over-estimate them THAT much. The best I can hope for is to gain a bit more clarity about those who share my enthusiasm for the Latin language. And of course, not ALL of those people are Ciceronianists, or even Cicero-and-Vergilianists. See for example the Ad Lectorum before the novel Capti by Stephen Berard, who, it is entirely clear to me now, will be judged less than an eminent Latinist by the Cicero-and-Vergilianists, but who is appreciated by some others. And there's no need for anybody to fight over anything here. It's just that there is one more thing to debate, about which, I had mistakenly assumed, people had long since ceased to debate. Excelsior. (Yeah, it's also been very recently that I finally figured out that "Excelsior!" had become a common expression because of Stan Lee, and not because of contemporary Latinists in general. Be that as it may, it's still perfectly good Latin.)

Posted by Steven Bollinger at 1:33 PM

To support my blog --