The ancient Romans were very proud of their aqueducts, and even today, the remains of these structures, standing from France and Spain to northern Africa and Turkey, are amazing to see. 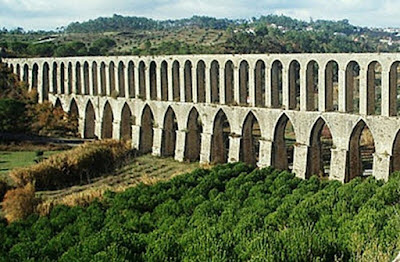 Sextus Iulius Frontinus, AD c35 -- c103, served as Praeter of Rome and Governor of Britain. Although he was a homo novus, that is, a man without an aristocratic family background, he served as consul three times. Having shown great ability as a military commander in Britain -- it is said, for example, that 70,000 members of the Gallic tribe the Lingones surrendered to him -- he was appointed curator aquarum, that is, supervisor of all of the Empire's aqueducts, in the year 97.

Upon assuming this post, the first thing Frontinus did was to acquaint himself with the details of the history and operation of aqueducts now under his care, and to arrange what he learned from his own inquiries, from official documents and older technical treatises, into a short book which he himself intended to use as a reference. It is mainly because of this book that we are familiar with Frontinus today. If you wonder how a book about the history, operation and technical details of acqueducts could possibly fascinate readers for thousand s of years -- read de aquaeductu urbis Romae by Frontinus. If the man was half as good an administrator as he was a writer, then Rome's aqueducts were in very good hands for a few years as Frontinus oversaw them.

Frontinus lists all of the rivers from which the Empire's aqueducts took their water; the length traveled by the aqueducts; the various diameters of pipes used at various places; instances of diversion of water by farmers before it got to the cities; estimations of when such diversions were justified by drought, and when they were unjustified; problems of pollution at various points in the water supply; the names of past officials in the aqueduct system; what Frontinus intends to do as the supervisor of the whole; and a lot more, in a text which is 60 pages long in Kunderewicz's 1998 Teubner edition. Frontinus' text is a model of economical prose. And it demonstrates that economical and technical by no means must equal dull.

Frontinus also wrote a work entitled de re militari (On Military Matters, which is now lost, but is mentioned as a source by Vegetius in his 4th-century book of the same name. A short work entitled strategemata survives, in which Frontinus describes historical accounts of various strategies used effectively by Greek and Roman generals. Dozens of inscriptions have been catalogued which record Frontinus' official positions and great official deeds.

But it is mainly for de aquaeductu urbis Romae that he is remembered. Tacitus, the younger Pliny and Martial all record various positive aspects of his public service, but one wonders how much they would have had to say about him, if they had not also recognized and admired a fellow author.

Of the manuscripts of Frontinus' work on aqueducts which we have today, only one is older than the 15th century. It was written in the 12th century at Monte Cassino, mostly by Paul the Deacon, and somehow survived having passed through the hands of Poggio. Scholars debate whether all of the later manuscripts derive from this 12th-century copy; several MSS shows signs of having come from an 11th-century Germany ancestor. The work was first printed in Rome in 1484; dozens more editions have followed.

Posted by Steven Bollinger at 1:04 PM