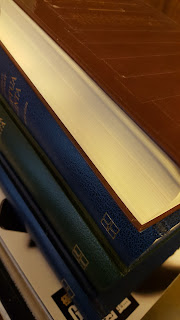 In the Bibelgesellschaft's 2nd edition of the Septuaginta, the Greek translations of the Old Testament made by Jews in and/or around Alexandria in the 3rd and/or 2nd century BC, published in 2006, there are forwards to the 2nd edition in German, English and Greek, in that order, and then the forwards and introductory material to the first edition, first in German, then in English, Latin and Greek.

In the 1997 5th edition of the Biblia Hebraica Stuttgartensia (so called because the Gesellschaft is headquartered in Stuttgart), the Hebrew Bible, of the Deutsche Bibelgesellschaft, there are forwards to the fifth and then to the first edition, first in German, then in English, French, Spanish and Latin. Then come many pages of Latin abbreviations. Then a few pages in which some of those abbreviations are translated into English. If I pretended that I was presently capable of explaining just exactly what all of these abbreviations are, I would be a fraud.

Posted by Steven Bollinger at 2:07 PM